“Thanks a million for taking the time to review the series FOUNDING OF THE CUMBERLAND SETTLEMENTS on your Tennessee blog!  I’ve ordered the entire set, hoping that it will provide me with additional clues for further research on my DAVIS line of which you’re quite familiar.  Years ago I adopted the genealogical research motto ‘The impossible just takes longer!’, and continue to keep an eagle eye open for “new” references such as this.” Donald Martin 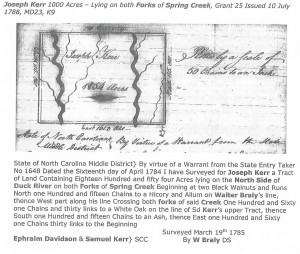 Tennessee has suffered substantial county records loss. One way to bypass this loss is the use of survey records. The Warioto Press supplies indexed images and much more. Each atlas volume maps the locations of the surveys and provides militia lists, settler’s petitions, and short bios of the principal players in each area of Middle Tennessee–BEGIN your research with these volumes and read all of the text–Introductions, Chapter descriptions, footnotes, and bibliographies.

2. Founding of the Cumberland Settlements: the First Atlas 1779-1804: showing who came, how they came, and where they put down roots.
Doug Drake, Jack Masters & Bill Puryear, Book with CD. Gallatin TN: Warioto Press, 2009. 236 pp.

PS The November 2015 research Guide from Family History Expos–Beginning Military Research Guide with accompanying CD-ROM–includes a substantial section on Tennessee military records and the lands available from Indian Land Cessions which I wrote. I invite you to check out this very new genealogy volume. Order from
http://familyhhistoryexpos.com. In early January, the guide will be available through Amazon as well.

This entry was posted in Uncategorized. Bookmark the permalink.