The Cumberland Settlements–A new, thorough resource for Tennessee is the seven-volume work on the Cumberland Settlements published by the Warioto Press, Gallatin, Tennessee. Supplement volumes are accompanied by CD-ROM 7.5 minute topographic maps in digital format. The alphabetical name lists and indexes are available online. http://www.cumberlandpioneers.com. 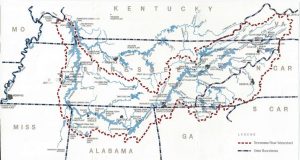 Founding of the Cumberland Settlements: The First Atlas 1779-1804—showing who came, how they came, and where they put down roots. Doug Drake, Jack Masters, and Bill Puryear, Book with CD. Gallatin, TN: Warioto Press, 2009. 236 pp.

Thoroughfare for Freedom: The Second Atlas of the Cumberland Settlements, 1779-1804, showing who came, how they came, and where they put down roots. Jack Masters and Bill Puryear. Gallatin, TN: Warioto Press, 2011. 255 pp.

These volumes are based on original land warrants, survey records, and surveyor’s plats for Middle Tennessee, with the full story added from a wide variety of sources. Topographical maps allow the reader to identify just where the lands are located on the ground. Appendixes include name lists from petitions, enabling documents, and a wide variety of personal records like diaries, correspondence, and military records.

Special features include the following: timelines for the Chickamauga War, 1777-1795;  435 pioneer casualties, 1780-1795, supplying year killed, name, where killed, source and map references, and whether the person was a signer of the Cumberland Compact; locations of stations, forts, traces, 1788; North Carolina land grants in Tennessee; disposition of the signers of the Cumberland Compact, 244 total men with citations of deeds, location of settlements, location of lands; early Black history—all this and more crammed in these well-designed and researched volumes.

An important question answered; Can a minor own land?
From the Cumberland Compact:

“all young men over the age of 16 years and able to perform militia duty shall be considered as having a full right to enter for and obtain in their own name as if they were of full age, and in that case not be reckoned in the family of his father, mother, or master…” Volume 1, p. 20.

One migration surprise among many: the exact routes of migration are traced for each of the major groups coming into middle Tennessee. For example, Isaac Lindsay, who brought four men and himself in 1767, left Knox County, Kentucky, followed the Cumberland River west through Kentucky and into Tennessee as it dipped down to French Lick (Nashville) through Stone’s settlement. Using the above map you can follow the exact route taken by this Lindsay group.

Ronald Bremer emphasized the importance of the Tennessee entry-taker every time I heard him speak and in various notes to me over the years. This local government official recorded some of the very earliest mentions of your ancestor and his intentions to settle in Tennessee. And, interestingly enough, these records have often survived courthouse fires which have plagued your Tennessee genealogy research.

George and Juanita Fox have now supplied us with a ton of early entries:

These are five of the six books compiled between 2002 and 2005 by George and Juanita Fox on Sevier County and the District South of French Broad and Holston—District records that many genealogists neither know about nor how to find!

Each volume includes a newly drawn map of eastern Tennessee waterways in 1807, with a list of those watercourses that have changed names. With these two pages in hand, you can match the actual locations where your ancestors located in a modern-day atlas. District boundaries are described, so you know which parts of counties are included within the jurisdiction. And a brief history of the whole area is especially useful because it is tied to the records themselves.

PS This is the first part of a Tennessee land bibliography so you can get started identifying your early Tennessee ancestors and where they got their lands–the majority of early settlers came seeking lands–free or for purchase. They can be documented using these resources, most of which by-pass burned counties..

This entry was posted in Uncategorized and tagged Early Tennessee settlers and ancestors, Records to by-pass burned counties. Bookmark the permalink.